We flew from Manchester to Edinburgh, and the cars were lined up, outside the airport, fuelled up, and ready to go.

This latest version is from a long line of 323 and Mazda 3, the first model dates back to 1977, then in 1991 Mazda introduced a five-door hatch with pop-up headlights, quite a revelation back then, and probably would be today.

The new ‘3’ doesn’t have pop-up headlights, but does have some very nice lights, especially the round rear ones, very distinctive and sexy.

We set off from the airport in a 2.0-litre petrol version that produces 122ps, and goes from 0-62mph in 10.4 seconds, and a top speed of 122 mph where permitted and coupled to a 6-speed manual gearbox that is quick and slick, and has a short stick, that makes it feel sporty.

Off in a Southerly direction, taking in some spectacular and dramatic scenery along the way. The roads in places were twisty, and some odd cambers to contend with, but this five-door family hatch coped very well, with whatever we threw at it, it handled beautifully.

Afternoon tea and cake stop was at Abbersford, the home of Sir Walter Scott, and we managed to convince everyone, including the ladies serving the food that this Sir, was Scott of the Antarctic, and wrote Rob Roy on the boat heading North to the cold climate, bit of fun, but left them wondering, and a bit confused. Nice old house Walter lived in, and must have been a wrench leaving there for Polar Bears and Penguins. But a very nice cuppa, and lovely choice of cakes. 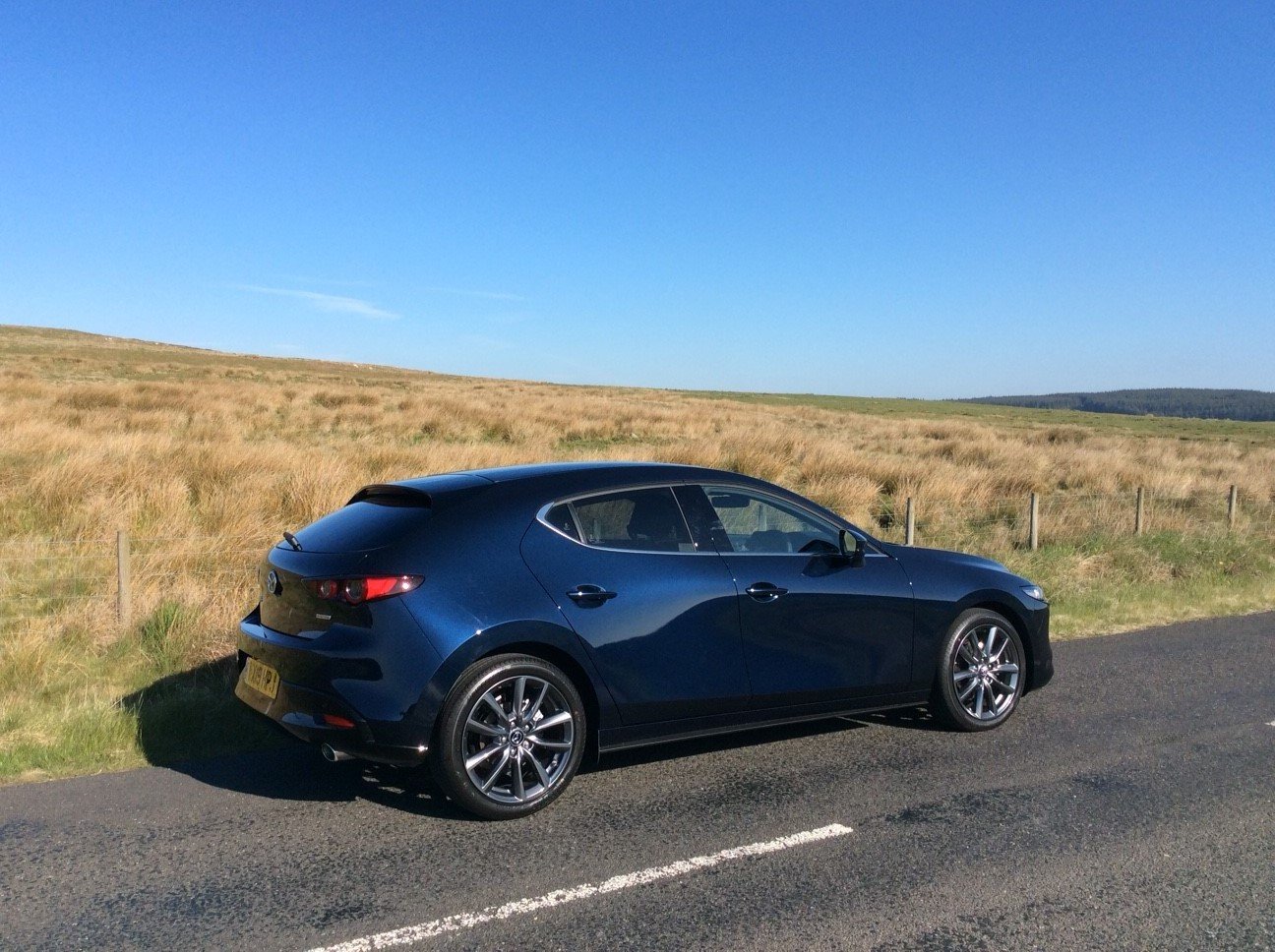 We then swopped cars and went into a 1.8-litre diesel 6-speed manual that produces 116ps, goes from 0-62mph in 10.3 seconds. Mazda have spent an awful lot of time and money on NVH (Noise, Vibration, Harshness). They told us that they have improved no less than 49 areas where it would help make it better for all in the cabin. This certainly seemed to have worked as this diesel was just so quiet. We had to stop, look in the filler flap, and look under the bonnet to check it actually was a diesel, and it was, so quiet, and so refined.

The Mazda3 measures 4,460mm long, 1,795mm wide and 1,435mm tall, so it all looks in proportion and a bit ‘coupe-like’. The rear quarter panel, between the rear door and rear door/bumper is huge, a very big piece of metal, but somehow it works. The bonnet slopes down, and meets up with a very large front grille, and again, this works and makes it look very bold.

We crossed the border between Scotland and England, and took the mandatory photos of the car alongside the huge rock with the two countries on it, as everyone else seemed to be doing also, especially our European friends.

After an overnight stop at a village pub in Blanchlands, Northumberland we were back into the 2.0 petrol for the return journey back up to Edinburgh.

During the press presentation the evening before in a rather luxurious marquee, we were told about the cylinder deactivation and Mild Hybrid system on the 2.0-petrol – right, we thought, we’ll give this a go. We pressed a few buttons, and there on the screen was the ‘Energy Flow Monitor’. It works quite simply, when under normal driving conditions, and you’re pressing the accelerator the engine works normally. But when slowing down, going down a hill or just take your foot off the right pedal, the engine either stops working completely or goes onto two-cylinders. Also electric is produced and stored in a battery in the rear. This stored power is then used to help the car under acceleration, and thus saves the engine being used at full power, and this helps save fuel, and reduce emissions, all clever stuff, nothing new of course, but a good use of what would be wasted energy. When you have the monitor in view on the dash, you do tend to try and drive more efficiently to see how much you can save.

Five models will be available at launch: SE-L, SE-L LUX, SPORT-LUX, GT SPORT and GT SPORT TECH, but only two engines one petrol, one diesel. 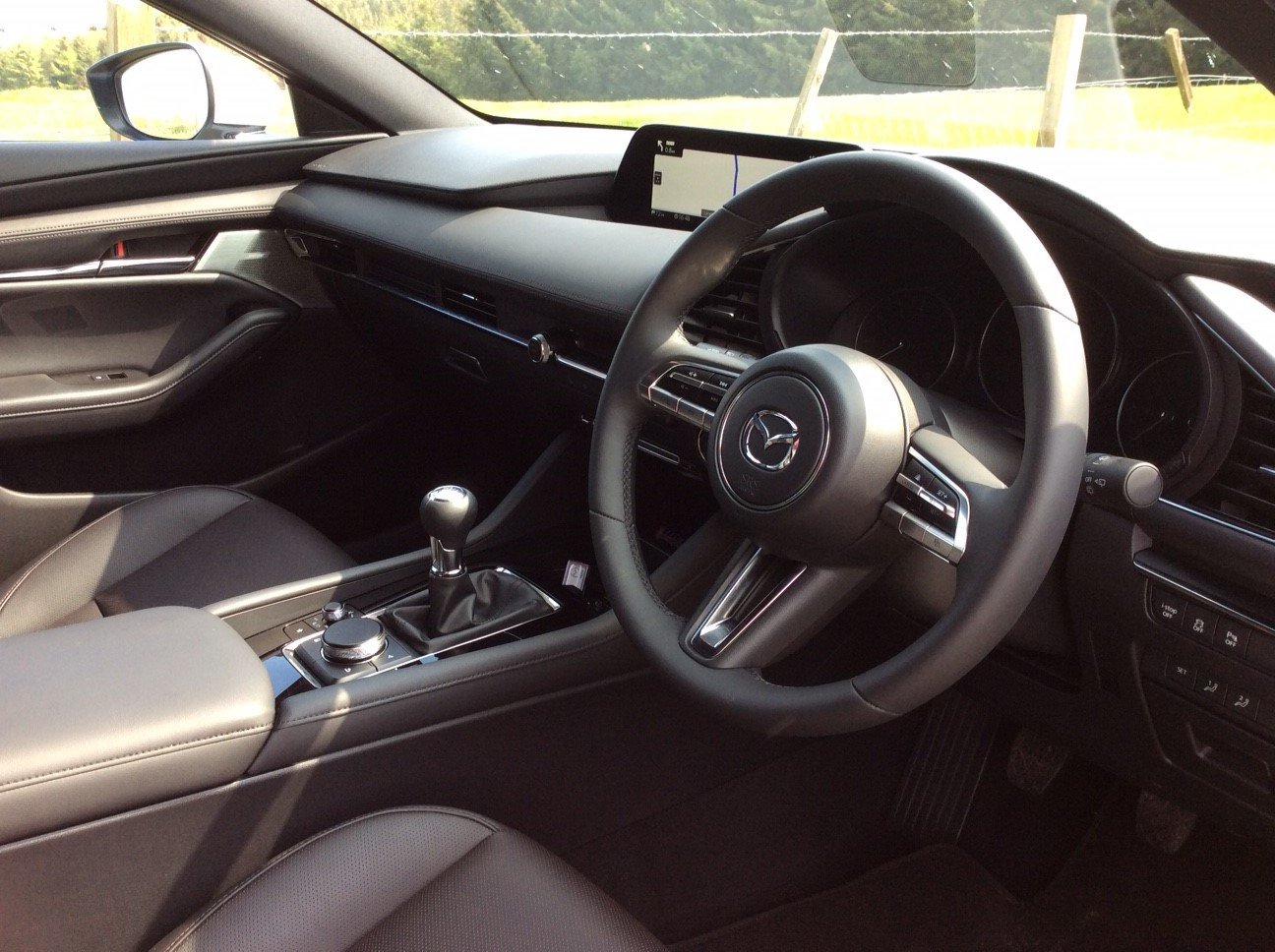 The dashboard is a bit strange, and very different for Mazda. As you get in the car, it does seem odd, and does take some getting used to. It seems to have many parts to it, at many different angles. It has a ‘floating’ top section that meets up with the windscreen and houses the large screen, this upper section is connected to a lower dash which has contrast stitching, and then below that is where the buttons and dials are and the heating and cooling vents. Despite so many different and separate parts, there was not one squeak or rattle from the dash.

We eventually got back to Edinburgh airport, after a fantastic, yet long journey with spectacular views. To say we were in the car for so long, we got out, feeling as fresh as a daisy, very comfy seats.

Although this five-door is available now, Mazda will be launching a four-door saloon later in the year. But no doubt the hatch will take the lion’s share of sales in the UK

This ‘3’ looks good, has some great features, is fun to drive, and is priced sensibly.