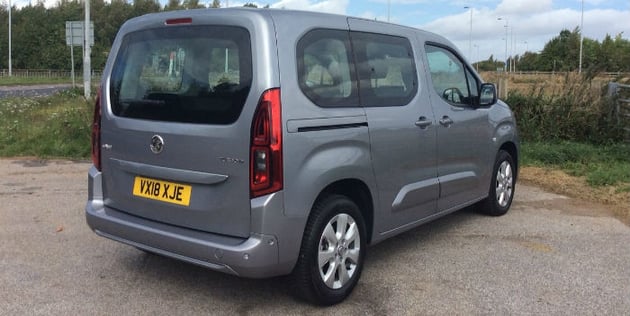 This all-new Combo Life is, as Vauxhall told us, been introduced to replace the Zafira Tourer, which has now been discontinued. This is probably due to the fact that the Zafira was based on a GM platform, and now with Vauxhall being part of PSA, then things have to change, no more GM connections, and more sharing with PSA.

The Combo Life is brother to the Citroen Berlingo Multispace and the Peugeot Rifter, previously known as the Partner Tepee. Although I haven’t driven the Citroen or Peugeot versions, I would imagine they are pretty similar to drive and build quality will be the same.

Up in Wetherby I drove the Combo Life Energy fitted with a 1.5-litre 130ps Turbo diesel, there is a 1.2 petrol also available which I guess will be powerful and quiet. The engine I drove is refined and smooth and coupled with a very nice 6-speed manual gearbox. A 8-speed auto is due soon, and this will be a great combination. The 1.5 diesel goes from 0-60mph in 10.6 seconds, a top speed of 115mph and its C02 emissions are 113g/km and a combined fuel consumption figure of 65.7 mpg.

The Combo Life is really a van with windows, and generally called a Car Derived Van, or CDV as we used to call them, and will be seen by many as a van with windows. But it is much more than that, and calling it a CDV is really doing it a bit of a disservice. This type of vehicle has come on leaps and bounds over the past few years and are much more luxurious than ever before. They are also fully loaded with a stack of standard equipment. The Energy model, that I drove has a great long list of standard specification, and everything you could possibly need.

The Combo Life is available in either standard wheelbase or a longer wheelbase, with either having the option, on most models of five or seven seats. The car I drove was a standard WB with five seats, so had a good amount of storage space, so the LWB will have masses of space.

A few days later, after being on this event, I went to Malaga with the family, and at the cars rental desk, the lady saw that we had quite a bit of luggage and offered for the same price as the VW Golf (or similar) a Mercedes Benz Citan MPV. And a good job she did too – four adults, one toddler, one child seat, four suitcases, one pushchair, five pieces of hand luggage, so as you can imagine, plenty of people and luggage. We travelled to and from the airport to the apartment in real comfort and luxury. This was putting the car to the ultimate test and in a real-life situation, and it coped perfectly and did exactly what it was designed to do.

Back to Wetherby, and the Combo Life, the sliding rear doors, like most of this type of vehicle have slide easy, are smooth and easy to operate, and are much better designed and more robust than ever before and don’t feel like they are going to come off the runners any time soon, much improved.

The interior feels solid and up to a high standard throughout and very car-like, which I suppose is how it was designed.

There will be plenty of people who like the idea of this type of vehicle with plenty of room for luggage, goods and people and the fact they can have the option of seven-seats, and all the practicality and flexibility it offers. But they just cannot justify to themselves, and more likely to their friends, families and especially neighbours that they are running around in a CDV, or van with windows.

When testing the Vauxhall in Yorkshire I couldn’t really appreciate just how useful it would be, but the real-life test of a similar vehicle in Southern Spain showed off all the benefits of this clever car.

The Mercedes Benz actually changed my mind about the Vauxhall, and showed just how good this type of car is….